We are a democratically governed network of local Field Hearings partners in more than 80 countries.

(map of 84 countries where we are organized to conduct Field Hearings; see list of countries here)

In 2013 we revised our questionnaire based on the 2012 experience, and launched the Phase Two Field Hearings. Since that time, we have gained several hundred new partners, are organized in over 80 countries, and have conducted Field Hearings in 80 additional communities – for a total of 115 community Field Hearings. These more recent reports are written but not yet published; however, we continue to compile results and use them to influence decision-making at the local, national and international levels.

In 2016-17 we are scaling up to turn the Field Hearings network into a global Participatory Citizen Monitoring network, helping citizens to monitor governments and agencies and hold them accountable for progress towards more equitable development.

Read more about our Participatory Citizen Monitoring & Accountability network and how you can get involved! 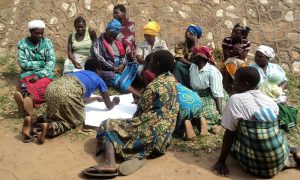 Convenor of the Field Hearings Project, Initiative for Equality (IfE), is a global grassroots network under the fiscal sponsorship of FJC (based in New York City, United States). Our mission is to fight for a more equitable world, facilitating the empowerment and participation of people who have been socially, economically or politically marginalized.

IfE’s Field Hearings partners include more than 300 civil society organizations and research groups in over 80 countries. These partners are already working in the marginalized communities, or advocating for their well-being and empowerment. Partners conduct Field Hearings using IfE’s methodology in order to amplify the voices of community members and bring them into national and international decision-making processes. Some partners also follow up with the communities, helping them to hold governments accountable for duties and promises, or facilitating discussions on community-initiated democratic and participatory economic development.

Each country with more than three partners may form a ‘National Committee’ consisting of representatives of all the partner organizations. This Committee discusses issues related to the conducting and reporting out of Field Hearings, elects a Coordinator to represent them on the global Steering Committee, looks for ways to empower community members to bring their wishes into nation-level decision-making, and engages in joint fundraising to support their work on behalf of the communities.

In 2013 – 2014 when the Field Hearings were undergoing a period of rapid growth, we had Regional Coordinators to help recruit and coordinate the many partners. Regions with Coordinators included East and Southeast Asia, South Asia, Central Asia, Central & Eastern Europe, Western Europe, Middle East & North Africa, Eastern Africa, Western Africa, Central Africa, Southern Africa, and Latin America. The Regional Coordinators are not in place at the moment, but the structure and process is in place, and can be reactivated as needed.