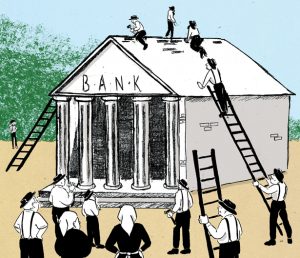 Models of interest:  The economic models we will consider facilitating or working with include the following:

Clear, compelling, and viable economic alternatives to the current inequality-generating system must be developed. These alternatives must balance various considerations, including incentives for innovation and hard work, stability of the economic system, feedback that ensures responsiveness, democratic decision-making, cultural compatibility in different societies, meeting and protecting basic human needs, etc., in addition to promoting equitable opportunities and outcomes. We will analyze models from every useful source, especially those with good track records, and discuss and adapt them. We will engage the public in these discussions, rather than keeping the debate within the academic-industry-government nexus. And we will network with communities and groups around the world to help connect them with the information, expertise, financing sources, and encouragement to initiate their own equitable, democratic and sustainable economic alternatives.

Traditional economic approaches:  Indigenous communities were engaging in economic activity (with or without monetary systems) for tens of thousands of years before colonization and then globalization made it possible to impose outside economic systems on local communities. Examples range from tribal or community ownership and allocation of land and resources, through a variety of cooperative farming and other business models. These traditional economic approaches need to be investigated as potential options for communities before discussing new models.

Local currencies:  Local currency that is created in a cash-poor community can act as a medium for exchange of locally-produced goods and services, freeing people from reliance on national currencies in short supply. Numerous communities around the world have set up their own currencies to facilitate more productive economic relationships based on local resources and labor, or simply to encourage spending at local stores rather than external markets. A description of various alternative currencies can be found at http://en.wikipedia.org/wiki/Local_currency.

Credit Unions, cooperative banks, and public banks:  These depositor-owned financial institutions provide a ready alternative to the corporate banks that wreak havoc on economies. People who deposit money in the credit union own the business, in shares equivalent to their deposit. Such institutions can set up fair and equitable fees, interest rates, salary structures, and other policies. Credit unions are quite common in the US, although some are more democratic and responsive to their dispersed owners than others.

There is currently a movement to develop another alternative to privately held banks: that of publicly-owned banks such as state banks. See articles at:

Crowd-sourcing of credit:  This is a new, internet-facilitated approach to raising money. The money can be provided as donations (no repayment), loans (repay the amount, plus some level of interest), or investments (those who provide the money own the business and take profits). Well-known examples include:

Depending on how it is approached, crowd-sourcing could provide pro-equality alternatives, or it could support the standard capitalist economic model (i.e. not “new economy”), or could even verge on predatory lending. Therefore, it’s essential to develop the platform with clear objectives and metrics in mind.

Cooperatives:  There are several cooperative economic approaches that hold promise as equality-generating economic mechanisms and can be implemented now. Two major problems face these cooperative businesses in the current environment: 1) access to capital, and 2) competitiveness with existing businesses that can undercut prices through cutting corners on worker protections, environmental protections, and quality of materials and processes. In order for cooperatives to develop, these problems need to be solved, partly through public financing mechanisms and partly through willingness of individuals and communities to “vote with their money” by patronizing these pro-community, pro-equality businesses.

* Worker-owned Cooperatives: these businesses can implement democratic decision-making and equitable pay scales, as well as being responsive to the needs and values of the workers, consumers, and local community. Major problems to overcome include access to capital to start such businesses, and making them competitive with private corporations. Examples of worker-owned cooperatives include:

(3) Evergreen Cooperatives in the US.

* Consumer-owned Cooperatives: like worker-owned cooperatives, these consumer-owned businesses can implement democratic decision-making and equitable pay scales, as well as being responsive to the needs and values of the workers, consumers, and local community. Likewise, they must overcome the problem of access to start-up capital. One example is the Schönau Power Supply, a consumer-owned power cooperative in Germany:

* Housing Cooperatives: these cooperative arrangements meet a basic human need in a more equitable way, minimizing costs and ensuring responsiveness to the individuals and families who live there. There are several models, including housing coops that are owned by all the occupants, and those which are owned by a cooperative entity and made available to occupants for a fee. Housing cooperatives are quite common in some former Soviet bloc states such as the Czech Republic, and are also popular forms of student housing in university towns such as Madison, Wisconsin, and Berkeley, California (US). See articles at:

* Food Cooperatives: these organizations are one alternative to the giant, vertically-integrated food corporations. Food cooperatives are owned by the customers, who can receive price discounts by volunteering time, and can participate in the governance of the business. They are able to establish equitable or integrated relationships with food producers such as local family farmers, or fair trade producers and brokers. Many have unconventional methods of distribution, including drop-off days, home delivery, or “pick-your-own” visits to farms. Food coops are quite common, especially in large university communities in the US, but still leave much room for expansion and increased appeal to draw in a large sector of the market. See articles at:

* Farmer’s or Agricultural Cooperatives: these cooperative structures come in several forms, including land-owning coops, or cooperative food processors as alternatives to the giant, vertically-integrated food corporations. Farmers’ cooperatives make it possible for food producers to process and market their own products, rather than being held captive by a few large buyers who set prices and conditions of food production. Another type of farmers’ cooperative is essentially a consumer cooperative, with food producers banding together to buy needed fuel, for example, at more favorable prices. See articles at:

Water districts owned and controlled by local users:  After the famous water wars of Cochabamba, Bolivia, in the early 2000’s, people began to look for alternatives to the privatization of water. Because human life, health, agriculture and business all rely on water, ensuring control and access is a central need for every community.

State- or community-owned infrastructure and industries:  This is a classic alternative that has gone in and out of favor over the years. Since the 1970’s, there has been a massive push over much of the world to privatize state-owned industries. Although infrastructure (e.g. electricity, communications, transportation) is more commonly viewed as a suitable space for state ownership, even in capitalist countries, the move by governments to raise capital without raising taxes has resulted in the privatization of infrastructure and even public services. Communities could consider returning to the public ownership option when looking to meet community needs, remain in control of outcomes, raise funds within the community, and ensure that profits likewise remain in the community. Because of economies of scale and the need to have integrated networks, some infrastructure and industry will require national-scale rather than community-scale ownership. High levels of transparency and democratic control will be necessary to avoid corruption in large-scale public enterprises.

Community Development Corporations:  A community development corporation is a well-accepted non-profit structure used to promote economic and human development in communities. However, they can take on a wide variety of missions and governance structures, and can thus range from highly beneficial and pro-equality to potentially harmful if diverted to serving the interests of an insider group. As with other alternatives, high levels of transparency and democratic control will be required to ensure that the outcomes are beneficial to the community. Examples include:

If you are interested in details on how to set up a cooperative, see the Cultivate.Coop website at http://cultivate.coop/wiki/Main_Page.