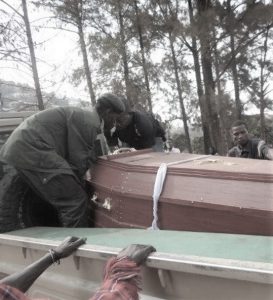 On 12-14 November 2021, at least seven Batwa villages were burned to the ground at Kahuzi Biega National Park, including a school built by the Batwa themselves. According to on-the-ground reports, two children were burned to death, a pregnant woman and her unborn child killed, two other Batwa women seriously injured by gunfire, one man (Safari Kalimbiro Bunjali) killed, and very likely others. Park ecoguards reportedly threatened to kill Batwa traditional chiefs, and blocked the trails to and from the villages under attack. The Park managers have alternated between denying everything and defending their actions. There has been no news media coverage of this event. We still have not been able to conduct a thorough investigation.

But this was not an isolated incident. On 23 July 2021, a similar attack was launched by the Kahuzi Biega ecoguards along with the Congolese army, burning three Batwa villages and killing two Batwa men: Lwabosho Ngunda  and Amos (Moïse) Mulimbanya. The Park managers claim to be trying to drive the Hutu militias out of the Park and to shut down their illegal mining and tree-cutting operations. Yet each time, the indigenous Batwa – the original inhabitants of these lands – are targeted.

In late October, RIFE (the IfE regional network in DRC, Rwanda and Burundi) released a preliminary report on the killings, village burnings, arbitrary arrests and other rights violations by Kahuzi Biega National Park staff that have been reported over the past 5 years. See the report here (in English): Report – What Happens in the Park – Oct 2021 The October report, updated in December 2021, lists the following:

Because of the irregular ways in which many of these reports reached us, we believe this list is probably a serious underestimate. There is an urgent need for methodical monitoring and incident reports on the ground, and for substantial investigations into each of the incidents. However, this will be difficult given the lack of political will by authorities, the remoteness of the areas, the impassible condition of most roads, and the danger of going into these areas.

Meanwhile, these ongoing attacks have driven hundreds of extremely poor and marginalized people into homelessness; many are sleeping outdoors without access to shelter, warm blankets, food, health care or schooling, or protection from attacks. People are dying from these poor conditions. Humanitarian agencies have not responded to our pleas for assistance.

This is a human rights crisis that must be addressed with all urgency.

Photo: 17-year-old Christian Nakulire was killed by Park ecoguards in August 2017 while collecting medicinal plants to cure dysentary; his father was badly injured but survived.

Articles on Corruption by Joseph Kabila